Google I/O developer-focused conference is an annual conference which was held in San Francisco, California in May 10-11, 2011. At Google I/O 2011 conference, within the presentation called High Performance KML for Maps and Earth, several Google employees recommended our software.

“It is as simple as to specify an input file and an output directory, and it just goes and magically generates these tiles for you.”

“Pretty simple, huh? And if that’s not simple enough there is even a GUI called MapTiler at http://www.maptiler.org/”.  Said Chris Broadfoot, Maps API team, Google Inc. about our software.

At the picture Sean Askay and Mano Marks, Google developers during their presentation talking about MapTiler: 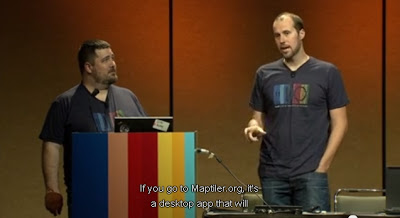